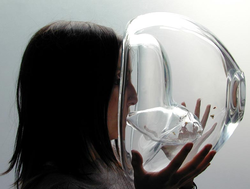 Trained honeybees (they don’t Sting) that can actually smell cancer.From Mashable: New research from Inscentinel, a UK-based firm specializing in insect research, suggests that honey bees can be trained to detect certain early-stage cancer in humans.

Yes, honeybees may be the trained, much like service dogs, to help save lives. Their ultra-sensitive sense of smell has already been harnessed to aid in the detection of explosive devices, but scientists believe these bees can be used to identify “biomarkers associated with tuberculosis, lung cancer, skin cancer and diabetes” — each of which can all be detected through smell on a patient’s breath.

Susana Sores, a Portuguese designer/researcher, has developed a device that will allow patients to take advantage of these bees’ phenomenal sniffers, while keeping them safe from bee stings. Early results are very encouraging, so this appears to be a development worth tracking.

It takes only 10 minutes to train bees to detect the smells of different diseases such as tuberculosis, lung and skin cancer and diabetes. The training consists of rewarding the bees with sugar water when they are exposed to the characteristic smells of diseases (Pavlov’s reflex).

The patient must then exhale air into the glass balloon. If the patient is ill, the bees will be attracted to the smell.

It’s more convenient and probably cheaper for early detection. But it should not replace more thorough examinations afterwards. Clearly, just because bees don’t detect anything doesn’t mean you’re not sick.