Is there a gender gap when it comes to talking about cancer? 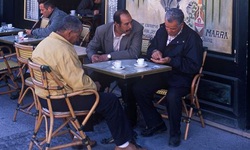 Talking about cancer is a scary subject for everyone, but new research suggests that men might be significantly more hesitant to discuss the disease than women.
Despite how (sadly) common cancer has become, a new study carried out by the charity Beating Bowel Cancer found that almost a quarter of men (23%) say they have never spoken to a friend or relative about cancer. This charity encourages people to speak out about the disease, so this is an area that needs serious improvement.
This study led Robert Ince, a writer for the Guardian, to reevaluate his approach.
Ince writes: “The research made me question my own form on talking cancer. Other than a cursory chat to a friend about his mother’s breast cancer diagnosis and subsequent treatment, I don’t think I had ever talked about the disease to anyone.
“That is until my world was devastated by my father’s diagnosis of advanced lung cancer in November 2012. Even though it seemed like every conversation with friends was bookended with the cancer chat, my father never talked about the disease even when he was in the midst of it. Neither do I think he spoke about the subject prior to diagnosis.”
This is a major concern, as silence is the disease’s strongest ally. In order to create a cancer-free future, we need to feel as comfortable as possible to talk openly about it. This will lead to greater understanding, greater compassion, greater education, greater care.
“Ultimately, ignorance is not bliss,” Ince writes. “Only by talking about the subject will we diminish the fear we all have of an illness which can be treated successfully if caught early.”